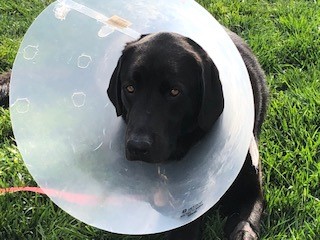 Good Morning and Happy Hump Day! I am at Week 6 now and well on the road to recovery. I did have a few setbacks and I am looking forward to being able to play again. Being quiet is so hard for me! I thought I would give you an update on how things have gone. Hopefully it will help if you ever consider TPLO surgery for your fur baby.
The hardest thing about the first two weeks was wearing that dang Cone of Shame 24/7. Luckily I’m pretty adaptable. I am a big guy, with a big head and that Cone was HUGE! I got used to it hitting walls and furniture in my confined space and I learned how to drink and eat without too much trouble. But, I missed my soft bed under my head – that plastic was NO FUN! This is a picture of me in the yard. I was allowed to sit outside with Dad to get some sun. But always on that dang leash! 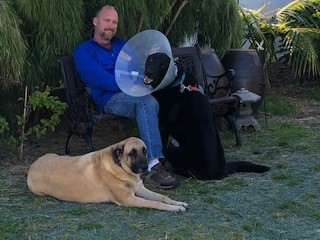 Then, just when Mom, Dad and Abby had gotten used to being wacked with Cone every day, I reached my two week mark! Hurray! Time to get my staples out! These pictures are my last night with CONE. I am so happy I will have my own head back tomorrow.

Dad drove me to Bernardo Heights Animal Hospital early one Saturday. I recognized where I was in the parking lot and DID NOT WANT TO GO INSIDE. Dad half carried me and half dragged me using The Sling. The ladies took me back and a few minutes later I came out and the staples were gone! But I still had Cone on my head. They explained it would be good to wear Cone for a few more days until the soreness went away. “WHAT?! I have been waiting 14 DAYS to get this thing off my head!” I howled. Dad looked even more disappointed than me. But he lifted me into the truck and I went home.

When we got home, Dad opened up the door to the back seat and I leaped out of the truck and landed on Dad’s head. Dad fell over trying to catch me and save my leg. We both ended up laying in the street. Cone had caught on the back seat during my flight – like a parachute. It was now in pieces. Dad took it as A Sign and that was the last of Cone. Two weeks was a huge milestone – but tough times were just beginning.

Over the next 2 weeks, I still had to stay in a spare bedroom by myself during the day and night. It is the only carpeted place in the house with a door and it was very important I did not slip on the floors. This wasn’t a big deal at the beginning when I was feeling bad – but now that I was better – it was TORTURE!  This is depressed me. 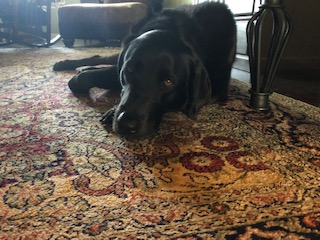 During Week 3, I started to bark and howl during the night to voice my displeasure. I got Dad up at all hours of the night for potty breaks. (I didn’t really have to go – I just wanted some company!) Then, one day I’d had enough. I started to dig. I dug and I dug and I dug. I was trying to dig right through the floor and find a secret passage OUT OF THAT ROOM!

Mom came home first. She could not understand why Door was stuck. She pushed and she pushed. When she finally got Door open a few inches – she squeezed through. She was not happy. Carpet had been dug up, unraveled, and was smashed up against Door. I was not sorry one bit! “Now maybe I will get out of this room!” I barked at Mom. (I never bark – so Mom knew this was serious.) Mom took me for a short walk even though I had given her a headache. After that day, some things changed for the better. But then I had The Setback.

During Week 4, Mom and Dad let me stay in their bedroom at night. During the day, I still had to go back to my room. But, now Abby was staying with me. That was much better. I was satisfied. Unfortunately for me, I became overly exuberant while walking on my leash and jumped up to play with Abby. I came down on my leg. I immediately lifted my leg and refused to put it down. Later that night I could toe-tap when I walked, but something was wrong. Mom and Dad were very worried. Mom tried to put ice on my leg – but I was having NONE of that.

This is Abby. She is upset because I am hurt.

Dad took me to back to Bernardo Heights early the next morning before work. Nobody slept that night because we thought I had broken my knee. Dr. Anderson moved my leg around and announced that I was OKAY! He prescribed some anti-inflammatory medication and sent us on our way. “Short, controlled walks on the leash!” he said when he waved good bye. Dad just nodded wearily. 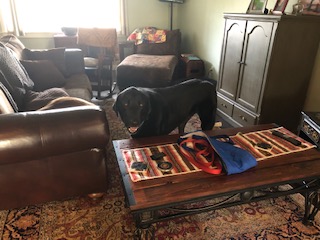 The last two weeks have a big improvement! Grandmom came to visit and kept me and Abby company. Thank goodness for Grandmom! This helped a lot with being bored and lonely. My leg is much better now but I still have two weeks until I go back to Bernardo Heights for my x-rays. Then, we will know if my bones have healed properly and if I can FINALLY start exercising. (Newfy Labs were not meant to be sedentary and I am afraid I am losing my buff body.) I am really looking forward to taking long walks and running in the yard with Abby. I took my deflated basketball with me on my last walk – but it wasn’t the same as chasing it across the grass. And I know Abby needs help racing after those skate boarders! Let’s keep our paws and fingers crossed for good news on April 11th guys!

I currently reside in California with my husband and two latest rescues: Abby and Cody. Abby is a 110 pound Anatolian Shepard and can most frequently be found hiding in the bath tub. Cody is a Lab Newfoundland Mix and is usually off counter surfing or finding toys to bring to Abby in the tub. Together they are helping us cope with an empty nest, another cross country move, and the unexpected loss of Eli and Sully to canine cancer in 2017. I have recently published my first children's book Rescue Dogs: The Early Years. View all posts by Mary Skinner-Vance